skip to main | skip to sidebar

I was brainstorming healer abilities recently and came up with this one. I'm pretty excited about the idea, it's likely I'll release a test item soon, although I haven't started coding yet, so we'll see. The idea:

Allow healers to "burst" fallen people who are sharing them, but instead of a normal burst heal it instantly revives the person for X seconds. After that time is up, they die again, maybe retaining some of the damage they took while alive, making them harder to heal. They probably are only returned to a fraction of their health, maybe there would be an additional penalty if they died while this ability was active, but that probably isn't needed if we already penalize for damage taken. Healing received while the ability is active would work while the target is alive, but won't have any effect on how fallen they are (they will always return to their previous level of "fallenness", plus any additional penalty I feel is needed for balance/risk.)

I anticipate the ability largely being used instead of a chain for escapes, but I can imagine some other really cool uses. It's not uncommon for a very strong healer to be the last member of a group who is alive. That healer bursting up the most powerful fighter, and then healing another player while the fighter protects them sounds really exciting. I like the risk that the fighter in that case might end up unhealable as part of the last ditch gambit. I suppose on a routine hunt it could be used to burst weaker players for their last minute tags, which is significantly less exciting, but probably also fun for both the healer and the dead player who otherwise would have had to sit out the fight.

One great thing about this ability is Faustus, Sespus, and Horus can be important ranks. Some combination of Faustus and Sespus can determine how much the dead person is healed, and Horus could not only enable the ability to be used on people who are more fallen, but will be useful when raising fallens who take damage after this ability is used on them.

I'm not sure if it makes sense to make this ability trainable, my intuition is that it does, but maybe it needs a cap. For each rank to feel substantial I think it'd have to be pretty effective, but the ability has some natural caps (it probably doesn't make sense to go above 100% health, or stay alive more than some number of seconds). Or maybe it would end up being best as a consumable item primarily driven by existing stats. I'll probably start it off that way to test it out, that way I can play with balance without screwing up peoples training.

Posted by Slarty at 9:00 PM No comments:

Warning: This post may not be as sexy as the title implies.

I've been wanting to write a bit about my creature spawning strategies for a while, since I've put a lot of thought into it over the past few years. This is one of those things that can really ruin the magic, so I've held back. I'm hoping to go light on the specifics, and just focus on where I've been, what I've learned, and where I'm going.

The first spawns I ever created were for Metzetli. I started with the initial jungle area, with a goal to make "South Forest for 6th circlers". The spawns took heavy influence from South Forest, which contains a very varied spawner, with chances of some extremely difficult challenges (for the level). I added my own tweaks to this style by overlapping very quick spawners that had about a 90% chance of junk and a 10% chance of harder things, with slower spawners that focused on the beefy stuff. The element of danger is always there, with very quick spawns which usually result in 3 vultures, but could sometimes result in 40 rudremau. This got rid of the problem I saw with most hunting areas, where the retreat was either always dangerous (because the tough monsters spawned too fast), or always a cakewalk (because the tough monsters spawned way too slowly). Now it's usually fine, but you never really know what you'll find.

I used something like this style for a while, but I was really starting to question the idea of "junk" creatures. The idea was it allows weaker characters to tag along and still contribute, but that really doesn't scale. What is considered "junk" when you're fighting sazajas? Note the comical grey wyrm spawns in Tepui, that was a junk spawner, it didn't make sense, and it wasn't really fun. The Mountain Glen was a large scale experiment in having a lot less junk, and it was the first (large) area to get rid of my patented "dual spawner" system. This reduces the unpredictability, and lets me focus on a more consistent and targeted challenge. It was pretty successful, I think people enjoyed it a lot. Looking back I think Metzetli's spawns are still more fun than Mountain Glen, partially because I spent a lot more time on Metzetli spawners, but part of the problem was Mountain Glen was a halfway step. There was still junk, but there was less of it. And it largely used the spawning strategies of older areas which has a mix of "always junk spawners" and "always good spawners", which can make things predicatable and boring.

Still, I deemed the experiment a success, and moved even more extremely in that direction, practically eliminating the idea of junk spawns. I try to keep variance by creating lots of different spawner types with slowly increasing difficulty, then you mix the rate and amount of each to keep things interesting. The Lily Pond expansion was the first full on experiment with this style, and then Estuary after that was the biggest high level experiment. You can actually see the spawn strategy evolve as you go deeper into the Estuary, as I learned with each release. I still feel my newer areas are vastly more predictable than my older ones, which saddens me a little. I also think retreats spawn a up with tough monsters a bit too fast with this new style. It makes recovering from a tough situation too difficult, and too reliant on long chain runs.

I think Valley creatures are some of the best designed creatures in Clan Lord, and I've taken huge inspiration from them. You've got:

Valley Panthers - A little more powerful than everything else, but not by much. Rewarding, and satisfying to become powerful enough to beat. Generally average stats, when you vanquish it you can probably either hit it, or brick it, but not both, and almost exactly when it's a high kill, you can usually do both. Great feeling of progression.

Valley Cougars - There is something subtle about the stats that I don't want to spoil which makes these really interesting to fight. Back when they were created, they were possibly the only monster to use this trick well. Ground breaking.

Cave Cobras - Not ground breaking, but terrifying. I love this type of creature.

Stinging Beetles - The feraler that demands your attention, and teamwork, to take down. Very fun (sometimes aggravating).

Sasquatch - Boring, plentiful, rewarding creature. Too slow for my liking, and the stats aren't interesting to me, but always good to have some staple for an area.

On top of that, the creatures are all pretty close in level, but far enough that you get a great sense of progression as you get stronger (see Valley Panthers). I think the area was ahead of its time, and you can usually identify these creature archetypes (and the way they're spawned) in all the areas I've created. When I'm stumped and can't think of good stats for a creature, I still just take the valley panther and scale it up. I'm always happy with the result. And I've taken the idea of annoying feralers well beyond where it should ever go.

I think I've done my fair share of innovation, but the Valley is still a big source of inspiration. You really can't go wrong copying that formula.
Posted by Slarty at 8:45 PM 2 comments: 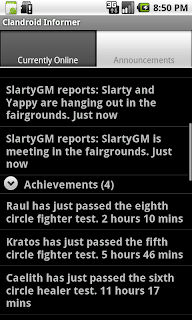 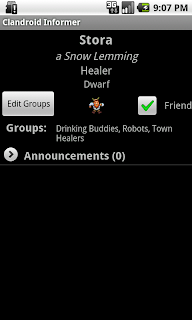 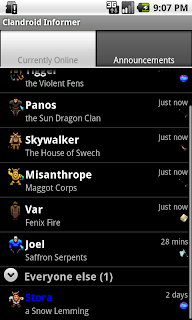 I decided to finish up a "Learn Android" project I started a year or so ago. It's basically just an Android version of the Clan Lord Informer. It pulls from an XML file periodically (sorry about your battery, I'm lazy!) and shows the current players and latest announcements. It can run in the background and notify you when your friends log in, and you can also set up groups and it will notify you when an entire group is online.
It's got a few more little features, including random crashes that never happen when you've got a damned debugger hooked up. The three clanners that don't have iPhones might appreciate it. If anyone wants to test it out, let me know.
Posted by Slarty at 12:08 AM 1 comment:

Only brainstorming ideas for Clan Lord could make me consider how scary a carnivorous horse would be. Those things are Strong, give them a taste for human flesh and you've got yourself a nice horror movie. Almost as scary as this.
Posted by Slarty at 8:59 AM 4 comments:

I just wanted to remind everyone that Yappy is hosting a GMs vs. Players Team Fortress Capture the Flag event this Sunday at 11:00am Pacific Time. Depending on turnout I'm anticipating Team GM will need a few volunteers; or we'll have to cheat even more than we're planning on.

And Pets Get Even More Awesome

Bloodmages can cancel one of their abilities by saying a "magic word" to rise from the dead. The main reason for this was there just aren't many good triggers for abilities when you're fallen, since you can't use an item. Some talk on the bloodmage forum about the general idea (including Skirwan's idea to allow people to customize the commands, so cool!) got me to thinking about how a game with verbal based commands could be cool. Instead of typing /use fireball your character would just shout "Abra Cadabra!" (or Hadouken!) and your spell would be cast.

Well, I just made the leap that this is the natural way to do pet commands. Probably make them customizable, too. Maybe you can train your pet with positive re-enforcement for certain words. ;) (This will almost certainly never happen, but cool all the same.) Regardless, even noncustomizable verbal commands are great. They eliminate the need for an extra item, and add flavor. If I were a good GM I'd leave it as a surprise, but it's your own fault for reading the blog and having it spoiled.
Posted by Slarty at 6:07 PM 4 comments: